I'm thinking again of Zadie Smith's searing and much-discussed critique of Facebook from 2010, where she links the Hollywood biopic of Facebook and its creator, Mark Zuckerberg, to the larger limits of the platform:

[Zuckerberg] uses the word “connect” as believers use the word “Jesus,” as if it were sacred in and of itself: “So the idea is really that, um, the site helps everyone connect with people and share information with the people they want to stay connected with….”

With Facebook, Zuckerberg seems to be trying to create something like a Noosphere, an Internet with one mind, a uniform environment in which it genuinely doesn’t matter who you are, as long as you make “choices” (which means, finally, purchases). If the aim is to be liked by more and more people, whatever is unusual about a person gets flattened out. One nation under a format.

That article generated a lot of response, notably this essay by Alexis Madrigal, invoking the historian's dictum that our complaints and worries about the banalities of Facebook are nothing new:

Our relationships with each other predate our relationship with Facebook! But that was (literally) just a footnote for her, whereas for me, it's the whole point of the enterprise. I want the equivalent of urban planning for Facebook; Smith wants to run off into the woods, or at best, a simple conservationism. You get to determine your level of investment in the digital world around you. You get to choose the people you listen and talk to. You have control over your data. You get to define who you are, no matter what your Facebook profile says. All that is not lost unless we choose to lose it.

I can be convinced by much in both of these articles, and like most people, I gather, I harbor a nagging resistance to Facebook even as I seek out the photos, the updates, the habits of my friends and family.

How to resist the either-or of the debate about this behemoth, Facebook's all-in incitement to share and be shared and to count that little thumbs-up as some kind of holy metric? Enter Benjamin Grosser's Facebook Demetricator, a plug-in for your browser that will remove all quantification from your Facebook feed. 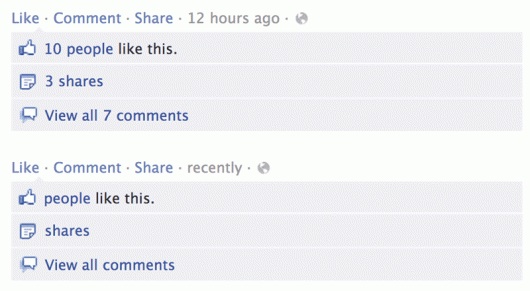 Grosser says that with this plug-in,

"No longer is the focus on how many friends you have or on how much they like your status, but on who they are and what they said. Friend counts disappear. ’16 people like this’ becomes ‘people like this’. Through changes like these, Demetricator invites Facebook’s users to try the system without the numbers, to see how their experience is changed by their absence. With this work I aim to disrupt the prescribed sociality these metrics produce."

I'm thinking, too, about the idea that quantification is a technology of distance, and I wonder if it applies here, or quite its opposite? See more in the video below, or at Ben's web site. Hat tip to Kevin Hamilton.

Update: A lengthy interview with Ben, and very sharp analysis on Cyborgology by Whitney Boesel: "I wonder if, by concealing the most visible signs that Facebook is tracking our every move, Facebook Demetricator doesn’t accidentally further conceal the fact that Facebook’s metrics and algorithms not only shape what we see and who sees us, but also track our every move. The free labor we perform when we use Facebook goes beyond providing visible content that lures our friends back to the site to do likewise; we also provide and generate a wealth of invisible content for Facebook’s databases and for Facebook’s third-party ad partners..."