Over at We Make Money Not Art, there's a long and substantial interview with the Institute for Boundary Interactions and their various prototypes for a large and ongoing project, Urban Immune System Research:

The Urban Immune System Research [UISR] project was the culmination of a two day event we ran in December 2010 as part of our LAB commission for Sideshow2010. We set out to discuss the relationship between notions of 'intelligent' systems, and principles of ecology. A whole raft of interesting and thought provoking ideas emerged, but after some discussion, they coalesced into the UISR project.

We found the immune system a fascinating and intriguing departure point, because it demonstrates complex self-organising properties. But what's interesting about this to us is how this kind of system is understood outside of scientific circles, in the everyday and within the context of the city. There is a general understanding of these kinds of systems, but we discovered an absence in the general lexicon of everyday terms with which to describe the kind of phenomena we explored in that workshop. So in part the name of the project is to ask questions about perceptions of intelligence and explore that gap between the science and the experience. 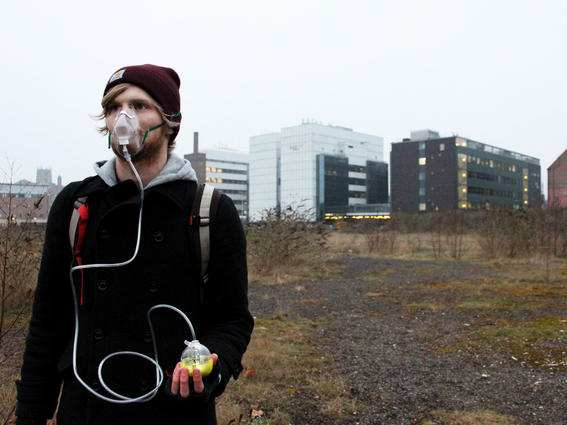 a backpack mounted with 4 megaphones that shouts out geo-located tweets as you walk around. The other two devices we made offer very subtle, private interactions, so we wanted to try something a little more confrontational.

The idea was to use the disparity between what can often be intended as very private or relatively anonymous reflections, and the openness of physical spaces that they are associated with. Shouting out these bits of text wrenches them, quite forcibly, back into public view. On the other hand though, the electronic voice puts all these statements on an even plane, and democratizes them giving a sense of the voice belonging to the place rather than any individual. These statements are at different times nonsensical, funny, or timely and touching, but they all add to the texture of a place, offering a glimpse of the collective memory embedded within it. 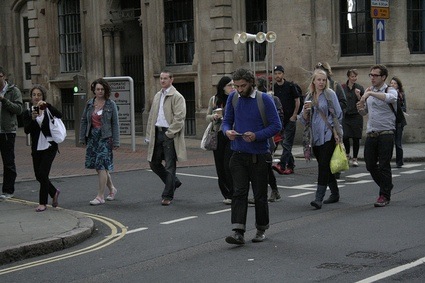 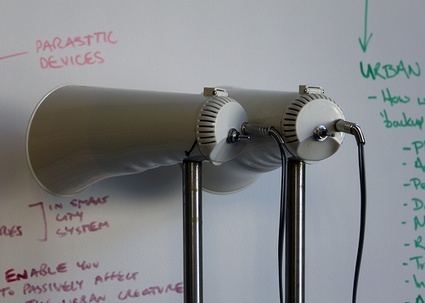