Scientific American recently blogged an account of Hugh Herr's talk at Idea Festival. Herr, himself a double amputee, is among the most optimistic about the promise of the dramatic and sophisticated prosthetic limbs now available:

To help himself and others who suffer from the loss of biological limbs, Herr created a discipline he calls "biomechatronics," or the study and design of ways to integrate mechanical and electronic technology with biological systems. "By the end of the 21st century, we will have largely eliminated disability," he added. 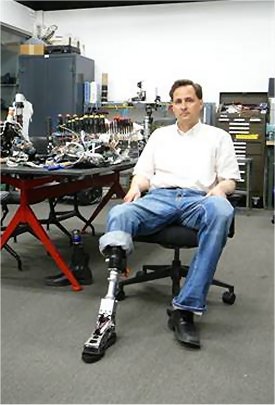 [Hugh Herr at his MIT lab]

Herr said he would not want his biological limbs back if such a thing were possible. "These are my creations," he said of his prosthetic lower legs. He then joked, "Besides, I'm able to upgrade. When I'm an octogenarian, I'll be able to walk with less effort and have better balance than an 18-year-old."

I also watch these prosthetic developments with excitement. But the language is a familiar one—augmentation as freedom from constraint, a theme Tim Maly found running through the thinking in his collection of 50 Posts about Cyborgs. I realized it's this emancipation theme that I find lacking in much of the recent hype over the latest prostheses and other whiz-bang tech that seems to promise only greater refinement in our adaptive devices.

Maly writes about this "emancipated cyborg" and hints at its unwieldy breadth in his overview of the cyborg project for The Atlantic.]

Fifty years [after the coining of the term "cyborg"], we've barely made it off the planet, but there's been a veritable second Cambrian explosion of cybernetic-organisms. Explosives detonated by text message, legs that run on bluetooth, insects that are spybots, killer planes flown by game controllers, plants that tweet their thirst, buildings with opinions, APIs that direct humans, printers that make car parts, phones that are computers, robots that drive marathons on Mars.

It is terrifying to find a place in all of this. We feel no closer to knowing who we are and even less certain about where we fit. 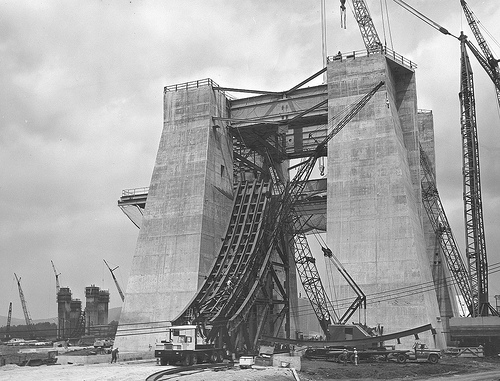 And the language just gets more slippery. If you leave aside the ritual dystopic hand-wringing, Quinn Norton points out,

It seems like the discussion of cyborgs in the time since 1960, echoing the discussion of robotics, bounced between news of DARPA and DARPA-like Sci-fi projects none of us will ever really see and Critiques on how We'd All Been Cyborgs, Really, Since We First Picked Up Sticks. I want a middle ground. I want to say there are inflection points where the scale of things changes the nature of what they do.

...We need language that lets us talk about the terrorism of little changes. Be they good or bad, they are terrible in aggregate.

Lately I've been wondering if these small changes might start to be described with the help of Niche Construction Theory: a recent move in the biological sciences to emphasize the ways biological adaptation is a proactive, reciprocal process, not just a responsive one:

Niche construction is the process whereby organisms, through their activities and choices, modify their own and each other's niches. By transforming natural selection pressures, niche construction generates feedback in evolution, on a scale hitherto underestimated, and in a manner that alters the evolutionary dynamic.

...Although niche construction is a widely recognized phenomenon (it is obvious that it happens) at present its consequences are neither well described nor well understood.

...[A]daptation as currently conceived is a process by which natural selection effectively molds organisms to fit pre-established environmental templates. Environments pose 'problems' and those organisms best equipped to deal with the problems leave the most offspring.

To varying degrees, however, organisms choose their own habitats, mates and resources, construct important components of their local environments, such as nests, holes, burrows, paths, webs, dams and chemical environments, and choose, protect and provision 'nursery' environments for their offspring. Hence, organisms not only adapt to their environments but in part they also construct them.

If we look at the vocabulary that describes the dynamism of evolutionary inheritance, we might find ways to describe to ourselves what's happening in our body-hacking, our augmentations, our extended selves. The implications for social sciences are far-reaching—and within disability studies, include critiquing the reflexive assumption about emancipation.

In other words, if we start taking seriously the idea that cultural action responds to, but also creates natural selection pressures, we might worry less that we're unreflectively adopting technologies merely "because we can"—we might see the flesh-body as more than an impediment to shake off. We might see its alterations and changes in a more nuanced light—and ask attendant questions about the pressures we create from choices we pursue.

What I want is this language that lets us talk about the terrorism of little changes; what I really want is a language that also turns a beady eye toward our repulsion about dependence—because this is, after all, what we imagine we're being freed from, right?