Jim Rossignol's piece for Tim Maly's recent project, 50 Posts about Cyborgs, includes this quote from Steven Shaviro's 2003 work, Connected, or What it Means to Live in the Network Society:

"I extend the power of my hand or my mouth or my brain only at the price of excising the original organ—whether literally or figuratively—to make room for its replacement. Each time we extend ourselves technologically, some part of the real gives way to the virtual. This is why every cultural innovation is attended by an ambivalent sense of loss."

Rossignol continues: "What would the implications be for our culture, Shaviro wonders, if prosthetic had been the dominant metaphor during the information revolution, rather than virtual?"

I had another post planned around this idea, until I realized this weekend that Krzysztof Wodiczko's celebrated Alien Staff has been pushing this question wide open for some time now. 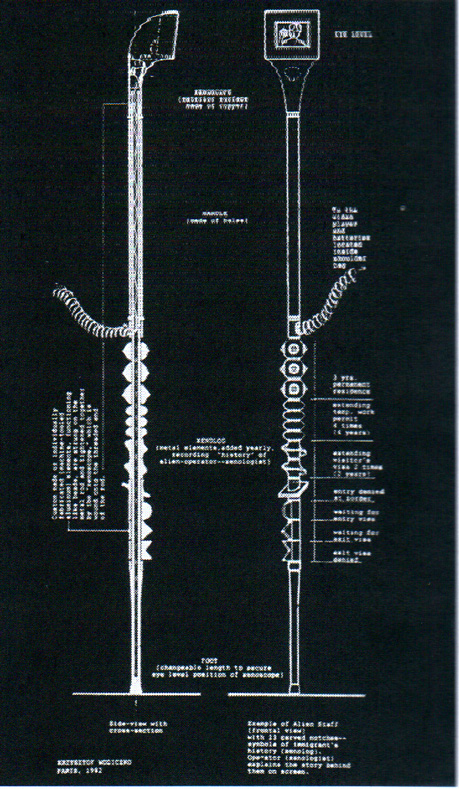 It's a personal instrument that creates a kind of "body double"—a virtual twin, in the form of a prosthesis. Let me explain: 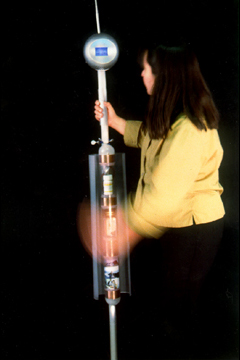 The Alien Staff was designed as a storytelling device for immigrants—a tool for mediated, amplified communication for a stranger in her new home country.

Wodiczko says the staff is reminiscent of the biblical shepherd's rod—so it's an ordinary assistive aid that has overtones of prophecy. It's designed with a small video monitor at the top, on which plays an immigrant's pre-recorded video of his story—his lost story, in effect, in becoming a stranger in a new land. The operator tells his own history to the camera:

It is not an interview in which I ask questions. In fact, when people start talking to the camera, they have less difficulty, over time, saying things to a camera than to a person. It suddenly becomes a kind of confession...

On the tapes for the Alien Staff, they can say all the things that they haven't had an opportunity to say, acknowledge all the aspects of their own displacement, and recognize their transformation. They can relate how they have changed since they crossed the border, and how many more borders they have crossed internally. They try to find the words. Very often they speak many languages, though not necessarily fluently. Often, they help themselves with all kinds of baroque phrases and metaphors, the particular language of strangers. They repeat the same story in various languages, and of course the story is different each time. The final edited version combines them all.

Wodiczko, in an interview from Tom Finkelpearl's Dialogues in Public Art 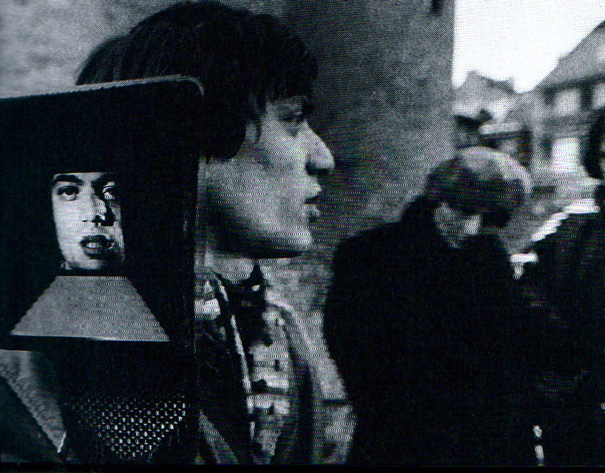 So the immigrant holds this staff on a city sidewalk, with the video of himself playing—his replicated image and sound. But the small size of the monitor is designed with intention—if you want to see who that is on screen, you have to come close. 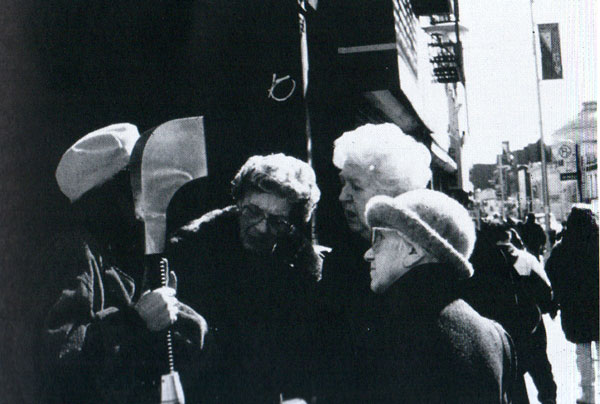 The "broadcast" attracts attention; we're more interested in an odd media device than in that sea of undifferentiated humans. But the image is identical to this "live" person holding the staff. Initially drawn in by the media, the normal stranger-space between bodies closes, bringing this foreigner nearer to his observer in their shared city. Close enough to wonder: why this recording of you, together with you in person?

So a conversation can start, a story told, but even better: the operator can correct herself in real time, can fill in the holes, can contradict the way she herself told the story before:

The staff is speaking, but she is also taking her prerecorded comments as tips. She is saying 'No, no, no. It is not like this, not exactly as the staff says.' It is actually worse or better, or funnier, or more tragic. (Wodiczko, from Dialogues in Public Art.)

Who hasn't been in need of a prosthesis, equipped with a virtual self, to fully represent some great divide traversed? Some stories need to be told twice or more—and simultaneously.

Alien Staff has been used and performed in New York and in European cities, beginning in the early 1990s. It's now in its third variant—the staff now responds to the user's gestures and movements—and it's part of Wodiczko's work with interrogative design. 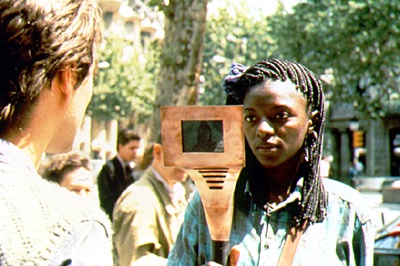 5. In Dialogues in Public Art