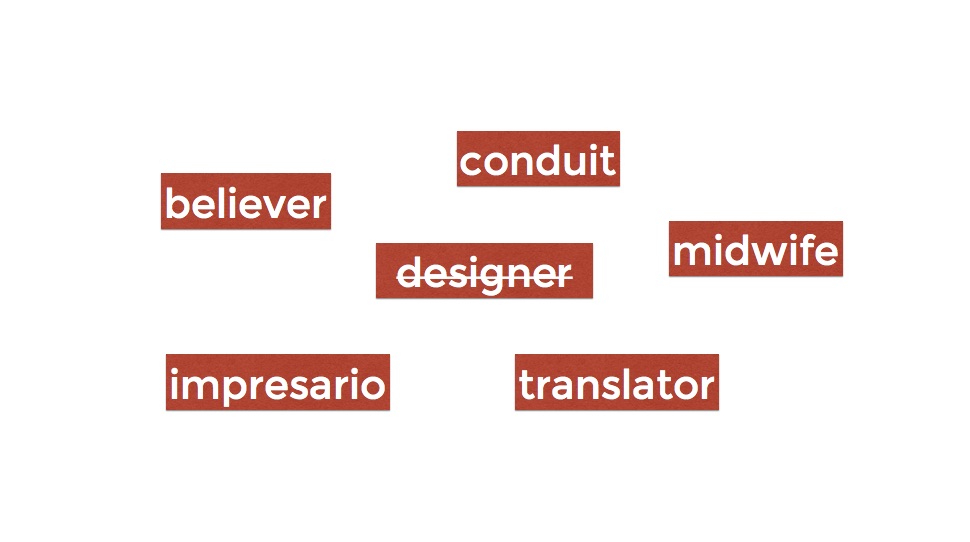 Speaking of roles for the designer: I gave a talk last year at the Eyeo Festival about (among other things) finding new names for describing design: as translator, believer, impresario, midwife and more.

I referenced Rory Hyde and the nouns and verbs he cites in his book about the future of architecture and design, but I hadn’t at that time come across Michael Rock’s extended writing on this topic too: designer as translator, performer, or director. Rock addresses the tension inherent in seeking an intentional definition of designer—namely, rejecting the supposed neutrality of the designer as “mere facilitator,” the invisibility fetish, but also avoiding the pitfalls of becoming the auteur, the singular genius.

The design community sort of wants it both ways, he seems to be saying. Asking designers to exercise their gifts for social and critical ends is a move away from obedient behind-the-scenes orchestration. But making design work pointedly social and political invariably ties its origins to a person or collective—that is, to authorship. So for Rock, translator, performer, and director offer just some of the various ways for naming and expanding one’s practice without it becoming a parade of authorship. At least I hope.

“If we really need to coin a phrase to describe an activity encompassing imaging, editing, narration, chronicling, performing, translating, organizing and directing, I’ll conclude with a suggestion:

Thanks to Jarrett Fuller, who pointed me to Rock’s work when I spoke with him on his podcast.