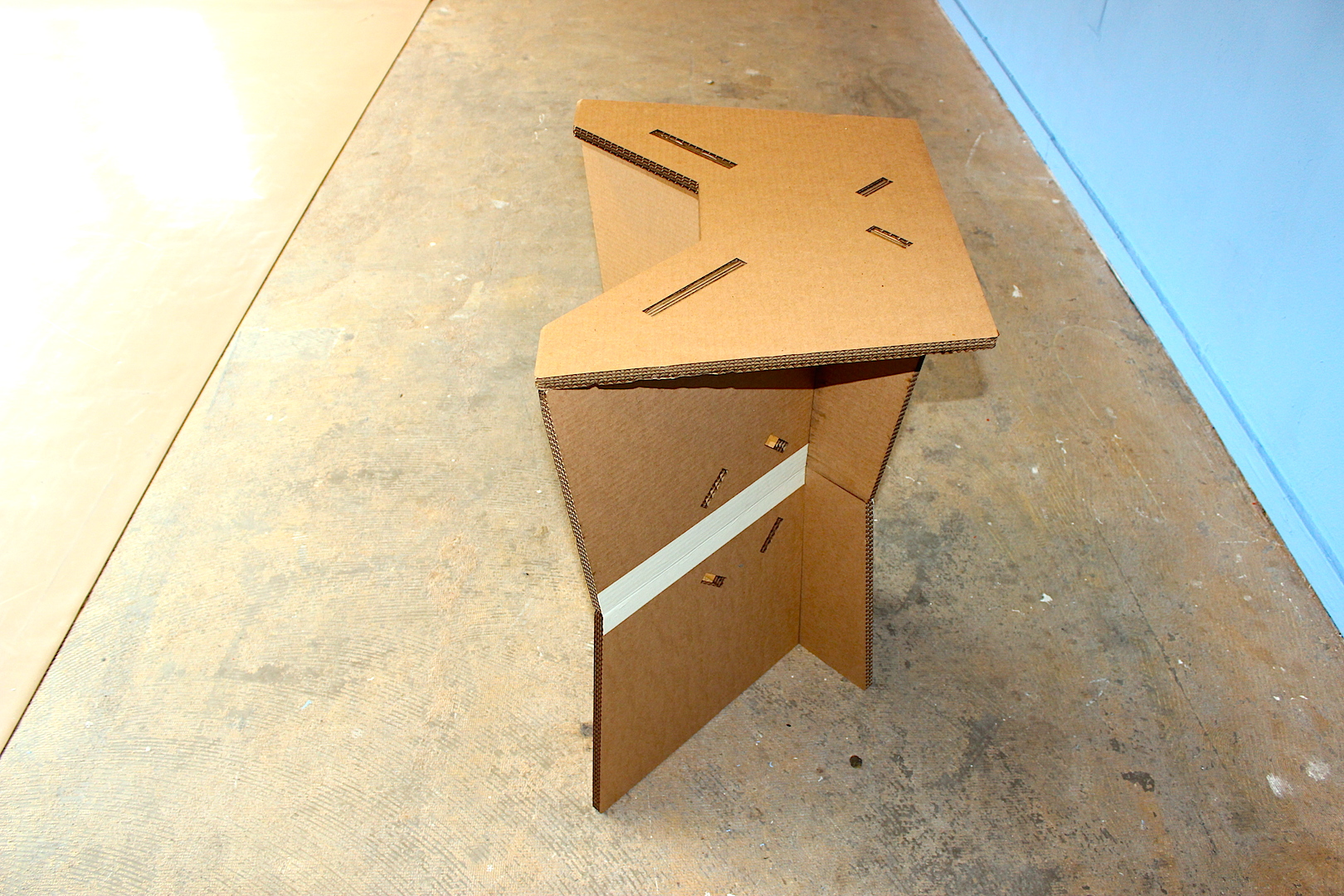 This post marks the first announcement of a new series of projects that I'm hoping students will join me in producing at Olin College: a Design for One series of objects, radically tailored to the wishes and self-defined needs of design partners with atypical bodies or neurocognitive conditions.

Amanda Cachia is a curator, an active scholar, and an art historian-in-training at the University of California, San Diego. She and I met a couple of years ago, and she's one of the busiest people I know—traveling constantly for lectures and gallery talks. She's in front of people in rooms a lot. That's her on the left, below.

But the architecture of lecture halls, stages, and furniture is scaled to humans generally well over five feet tall. And Amanda is considerably shorter: she's 4'3". In the photo above, she's standing on steps so she can reach the height of the lectern.

Amanda's curatorial work sometimes addresses this very discrepancy: how atypical bodies pose questions about standardized notions of "fit" for built structures. So, in a lecture she gave in 2012 during a California College of the Arts symposium, she wanted not only to rhetorically discuss this discrepancy, but to perform it. She had a podium built precisely for her stature, designed by Shawn Hibmacronan and built by Adrien Segal. This wooden one, below: 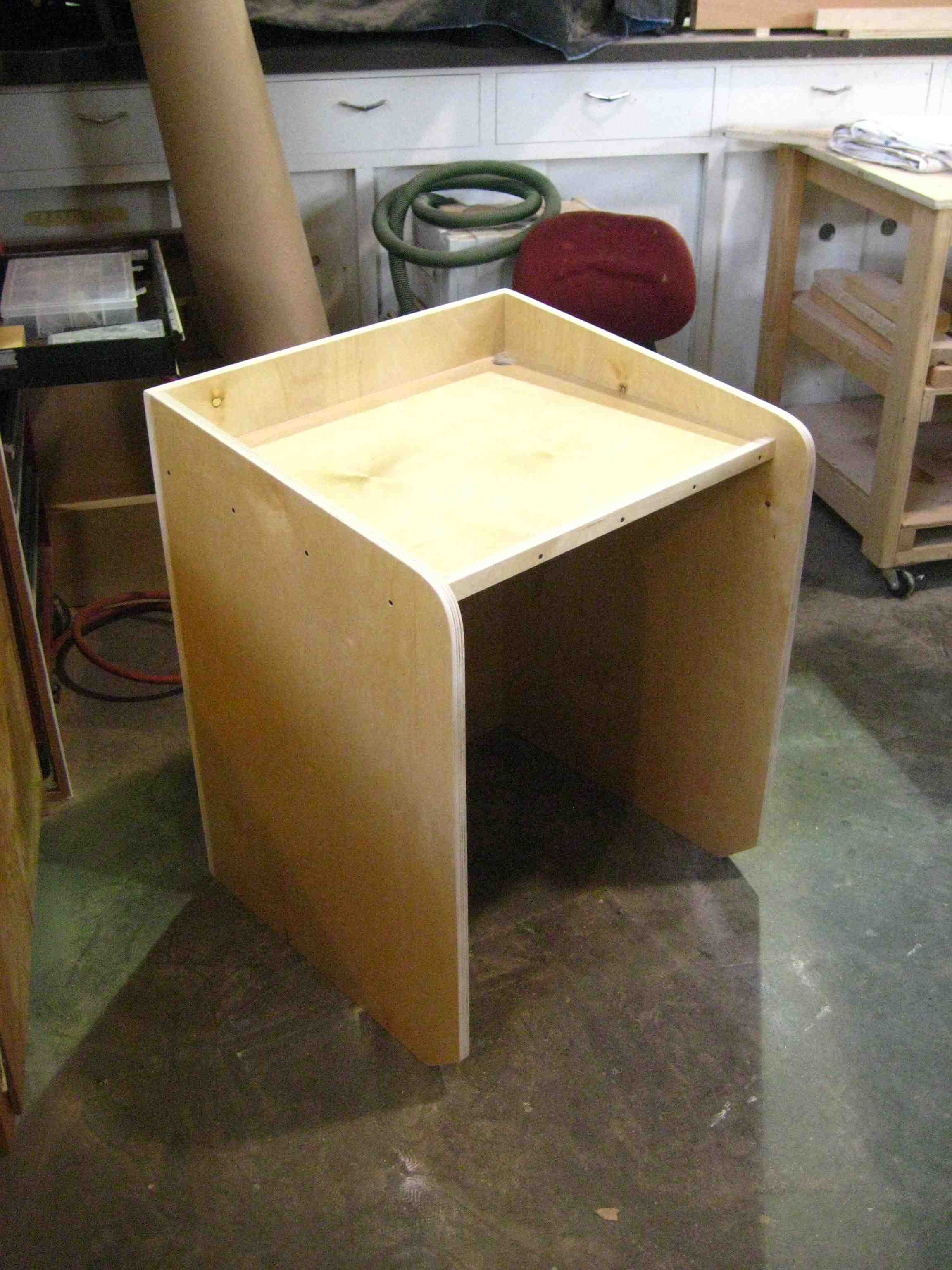 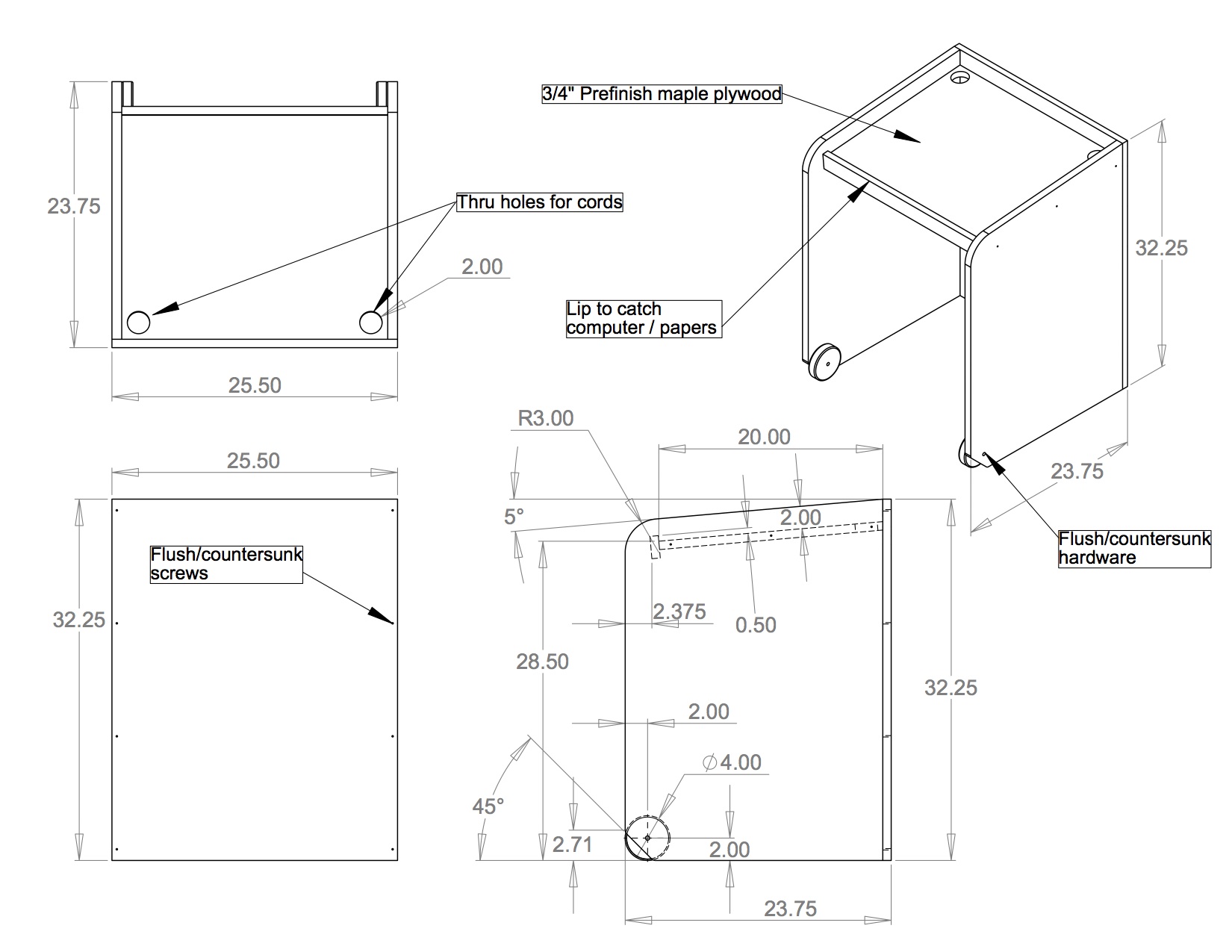 Using a smaller-scale lectern was so effective—as an idea, and as a design—that Amanda decided she wanted one that was portable, to take with her to every lecture event or gallery talk she gives.

So last year she came to me with a challenging but irresistible design brief: to create a collapsible, lightweight, sturdy podium that could go with her anywhere, in her suitcase.

I got to thinking immediately about Victor Papanek's "nomadic furniture," like this set of stools that can be assembled from a single piece of standard plywood and disassembled quickly. 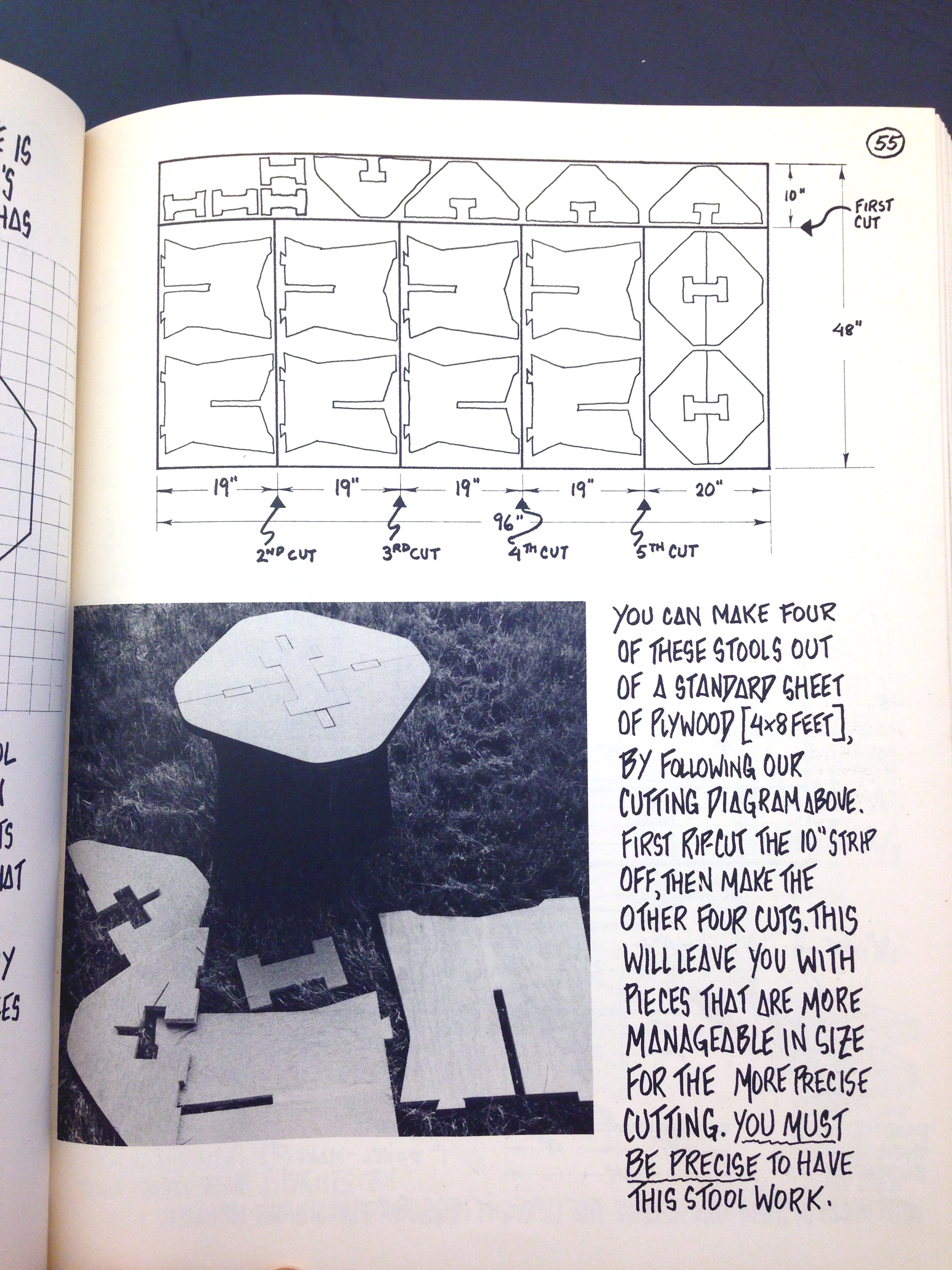 I went down to my friendly neighborhood design-and-fabrication storefront, Danger!Awesome, and worked with architectural designer Michael Velentzas to come up with a no-hardware model that would pack lightly, cleanly, and be structurally stable.

We messed around with paper models and such: 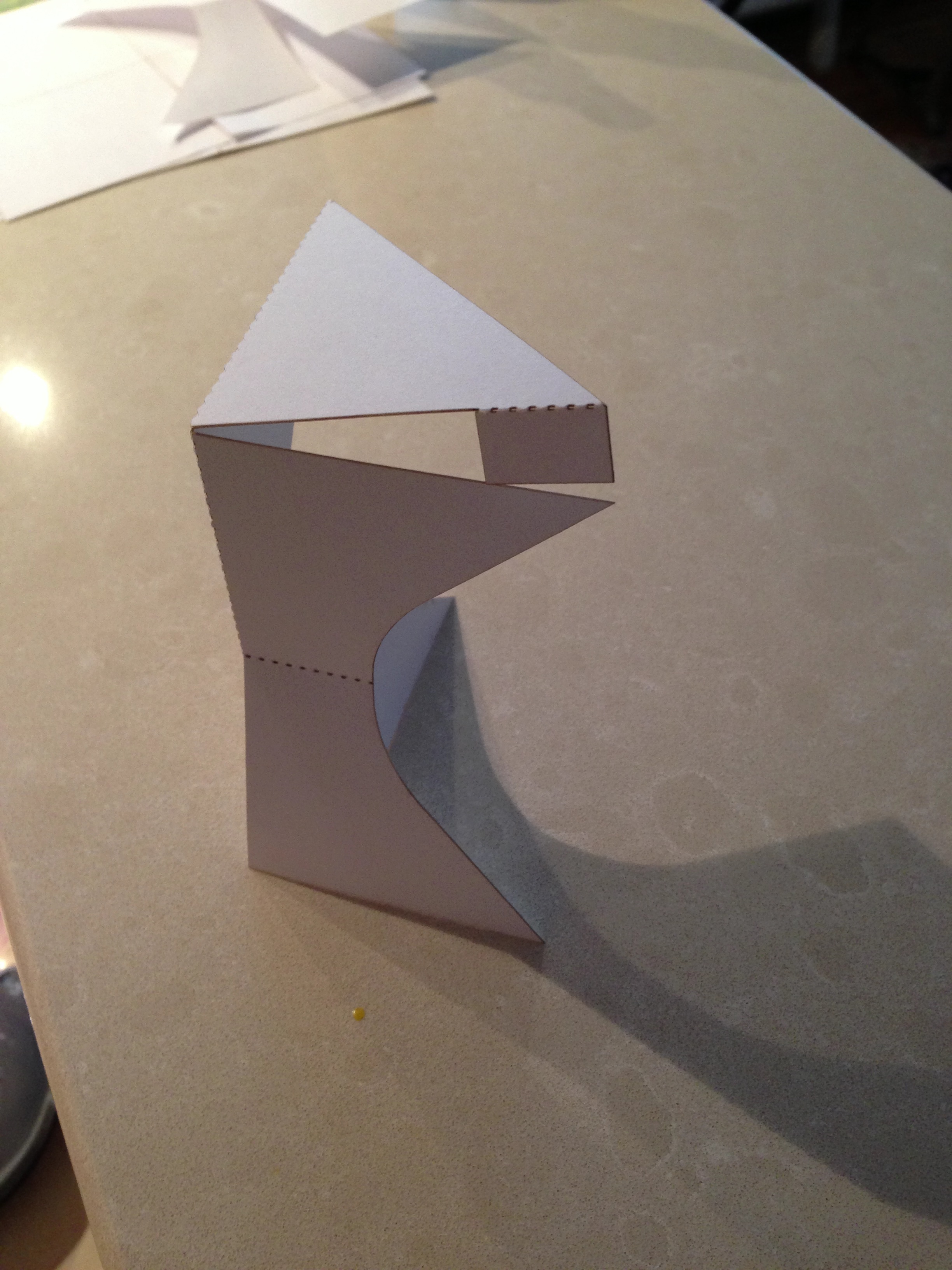 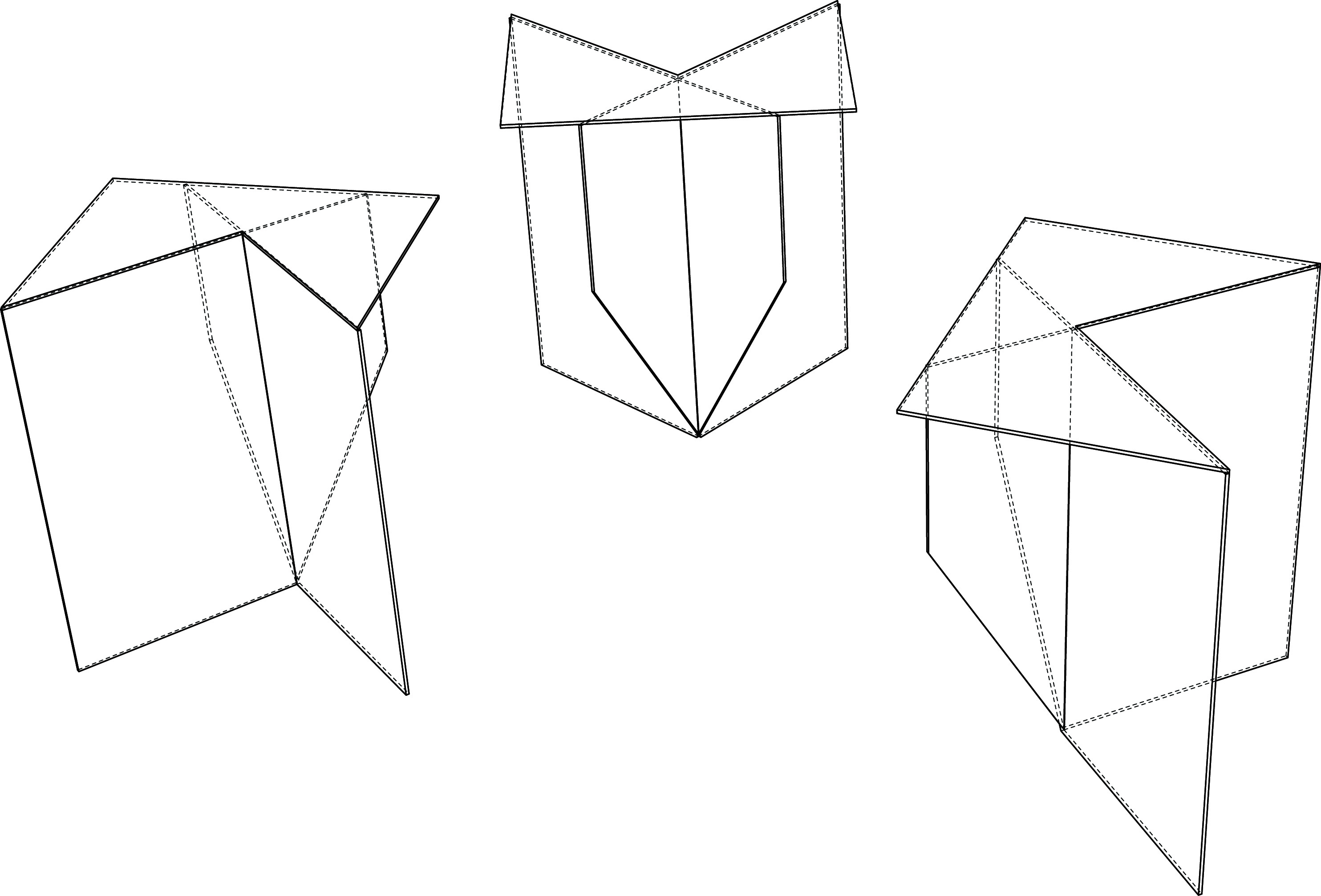 And in March, we met at a conference in New York, where I delivered her this tri-wall cardboard prototype: Just three pieces, barely hinged together with tape, and with enough material friction to make it hardware-free, lightweight, but strong. 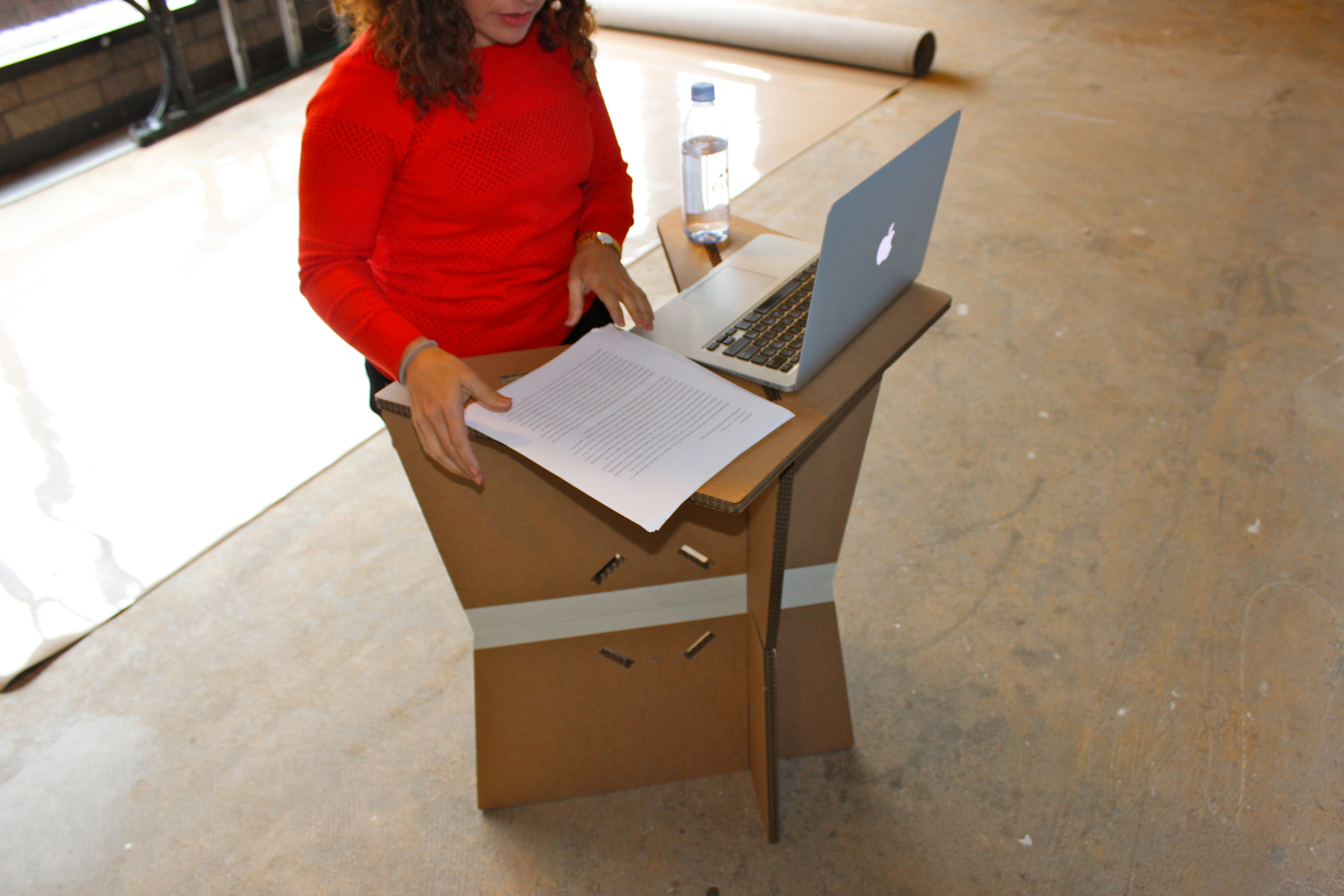 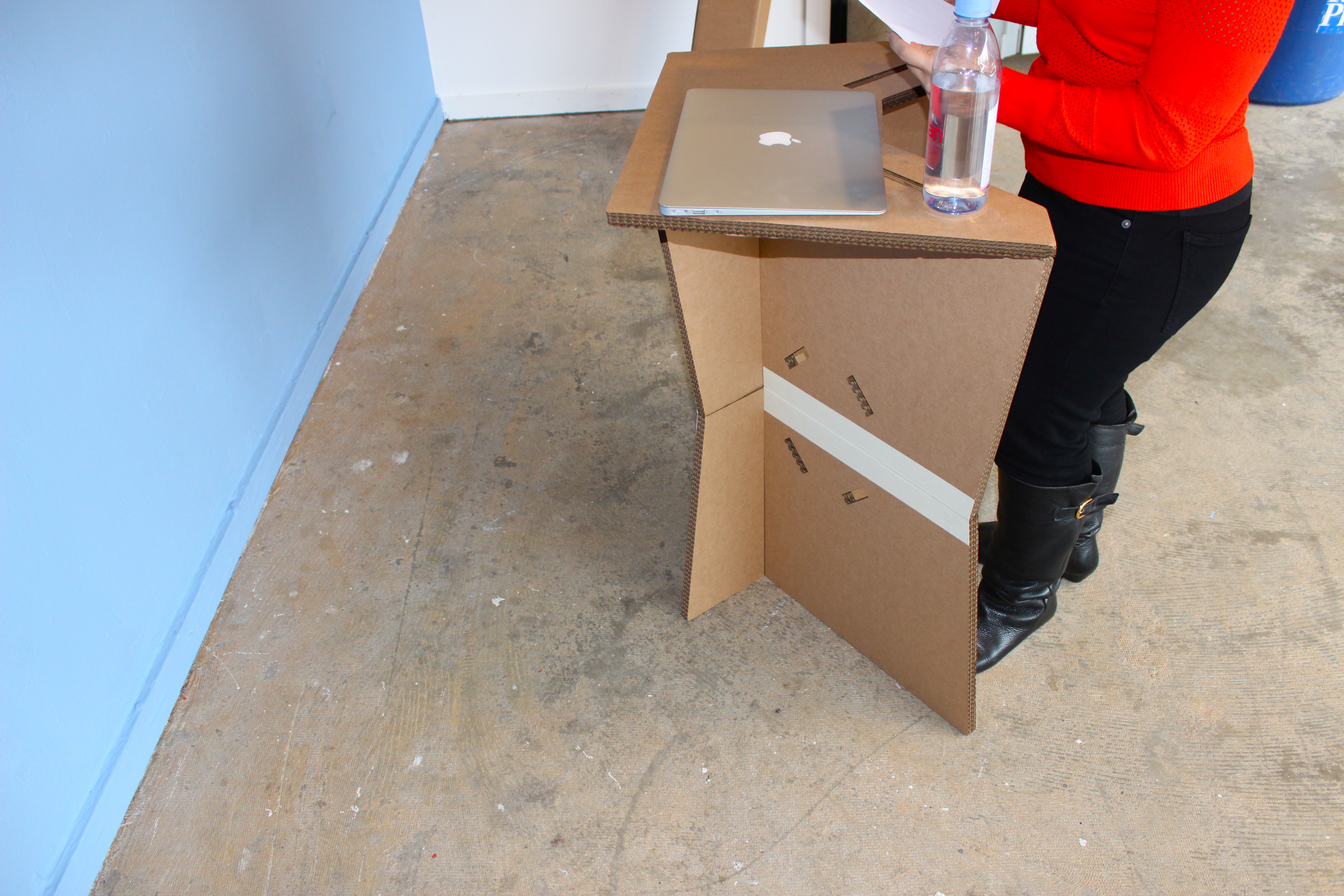 From the beginning, this model was meant to be partly prototype, partly performance. So we took the opportunity of the conference to try out its registers in time and space, as more than just a product. We arranged it so that when Amanda was introduced as part of her panel, I would silently go to the front of the room, and there assemble the podium. 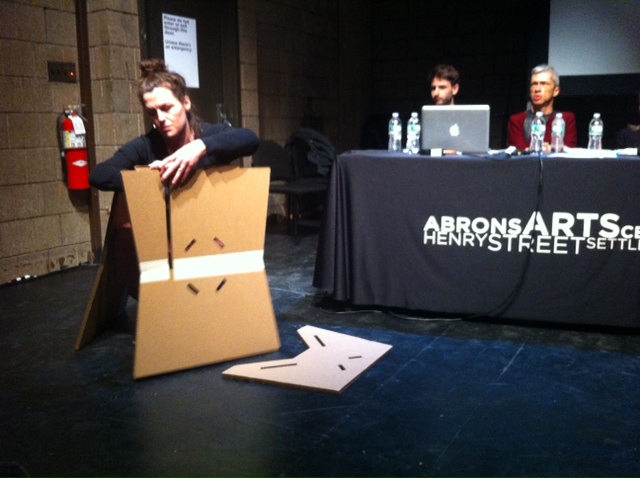 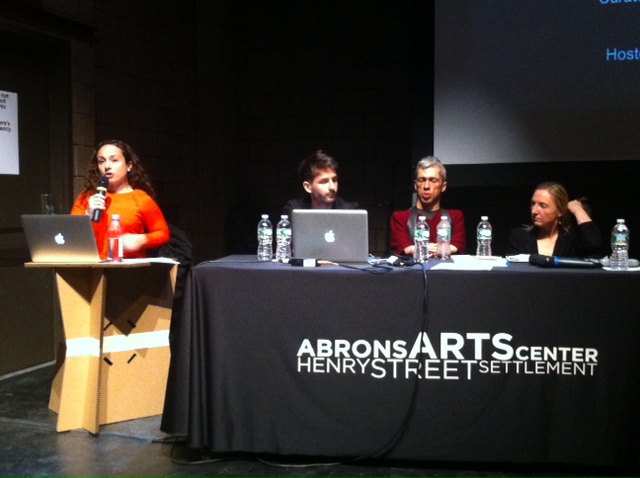 There was something so magic about seeing this quick reversal of scale. Usually Amanda's embodiment comes to the architecture of the room. She adjusts to it. But here, the architecture suddenly came to her—at least provisionally. It was like the scale of the built environment shifted in real time. It was her idea to call it an "alterpodium," following theorist Nicolas Bourriaud's coinage of the "altermodern"—a way for cultural producers to critically engage with the facts of globalization and standardization without merely nostalgia for locality or craft. There's lots to unpack there, and we'll be doing so in writing and conversation as we go.

Amanda needs a permanent solution, and for that I'm bringing her to Olin this fall. We'll talk to the many brains here about materials, design, and fabrication to meet all the constraints for a long-lasting podium. And we'll document our conversations along the way—including not just our materials and process, but how to consider bodily stature, whether and how to talk about dwarfism, and much more.

Note 1. Somehow I didn't photograph the cardboard model from a proper horizontal point of view—at its own height. How did I fail to literally see and document this important point of the project? I'll be mindful of that as we proceed.

Note 2. Amanda's already done some theoretical work around this project, including Bourriaud but also a theoretical engagement with reflexivity/responsivity to architectural or structural sites, following the ideas of Alberto Perez-Gomez and Andrea Fraser. Talk to us if you have more thoughts about that.