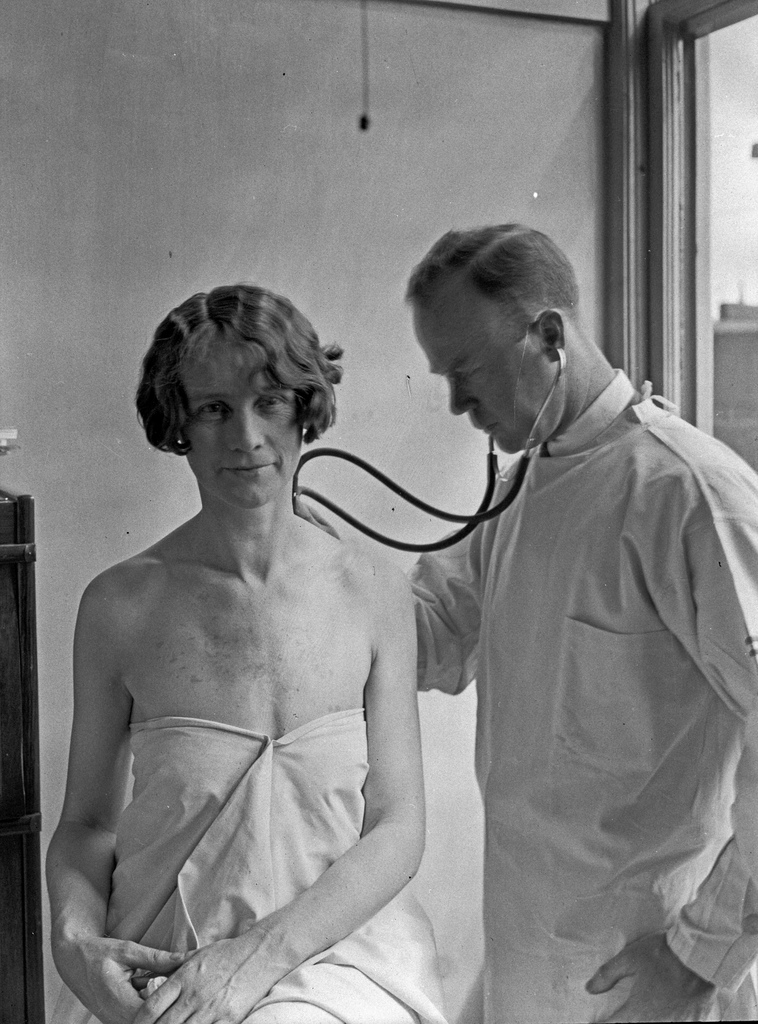 Via the new Harper's, I picked up Leslie Jamison's The Empathy Exams—a series of essays including the opening piece of the same name, which is partly about Jamison's job experience as a medical actor: someone paid to fake various kinds of ailments in order to train doctors in both diagnostics and bedside manner. The actors have to take on an entire persona, sometimes complete with familial details and emotional histories. Jamison's discussion of empathy—earned, taught, learned—was worth marking [condensed]:

Some med students get nervous during our encounters. It's like an awkward date, except half of them are wearing platinum wedding bands.

Other students are all business. They rattle through the clinical checklist for depression like a list of things they need to get at the grocery store: sleep disturbances, changes in appetite, decreased concentration. Some of the them get irritated when I obey my script and refuse to make eye contact. I'm supposed to stay swaddled and numb. These irritated students take my averted eyes as a challenge. They never stop seeking my gaze. Wrestling me into eye contact is the way they maintain power—forcing me to acknowledge their requisite display of care.

Other students seem to understand that empathy is always perched precariously between gift and invasion. They won't even press the stethoscope to my skin without asking if it's okay. They need permission. They don't want to presume. Their stuttering unwittingly honors my privacy: Can I...could I...would you mind if I—listened to your heart? No, I tell them. I don't mind. Not minding is my job. Their humility is a kind of compassion in its own right. Humility means they ask questions, and questions mean they get answers and answers mean they get points on the checklist: a point for finding out my mother takes Wellbutrin, a point for getting me to admit I've spent the last two years cutting myself, a point for finding out my father died in a grain elevator when I was two—for realizing that a root system of loss stretches radial and rhizomatic under the entire territory of my life.

In this sense, empathy isn't just measured by checklist item 31—voiced empathy for my situation/problem–but by every item that gauges how thoroughly my experience has been imagined. Empathy isn't just remembering to say that must really be hard—it's figuring out how to bring difficulty into the light so it can be seen at all. Empathy isn't just listening; it's asking the questions whose answers need to be listened to. Empathy requires inquiry as much as imagination. Empathy requires knowing you know nothing. Empathy means acknowledging a horizon of context that extends perpetually beyond what you can see.

It happens that Heidi Julavits just wrote a piece for last month's Harper's, called "Diagnose This." (it's paywalled at the moment, alas.) It also takes up diagnostics, empathy and listening among doctors, anchored by the author's own misdiagnosis and the rabbit trails it sent her on among doctors for weeks.

The selective hearing of doctors, according to Leana Wen and Joshua Kosowsky in their book When Doctors Don’t Listen: How to Avoid Misdiagnoses and Unnecessary Tests, is the result of the growing prominence of the “cookbook medicine” approach to diagnosis and treatment. Cookbook medicine trains doctors to follow “recipes” or “algorithms.” Wen and Kosowsky explain as follows:

Doctors, they conclude, are listening, but not to your entire story. They are listening for a “chief complaint” in order to activate a diagnostic protocol.

Julavits goes on to explore some of the ways medical schools in the US are trying to redress the stiltedness of this formula, the total absence of "gray-area thinking" from a clinician's training. There's Rita Charon of Columbia, who has students doing close reads of novels to see the subtext and multiplicity in personal narratives—to convince them that real precision in diagnostics resides outside the checklist. This conviction shows up in Charon's clinical practice too: While the usual doctor visit starts with a generic question—some version of what brings you here today?—Julavits tells us that "Charon begins her patient interactions with what she calls 'an invitation.' She says, 'I need to know a great deal about your body, health, and life. Please tell me what you think I should know about your situation.'"

There are other promising pockets of reform in medical education. Julavits points to the Mount Sinai Icahn School of Medicine, where students can apply for admission as early as their freshman year of college. Upon acceptance, the student can then pursue another major outside the pre-med lockstep, in order, as one professor of medicine puts it, "to train [a student's] brain to be human"—not just a memorizing machine—when preparing a life of complex clinical human encounters.

And perhaps it's a strong signal, Julavits suggests, that the 2015 MCAS test will include a new "Critical Analysis and Reasoning Skills" section, designed to complement the until-now exclusive reliance on hard science facts. But I'm still with Jamison in the end: There's no substitute for open-ended questions, questions that start with humility.